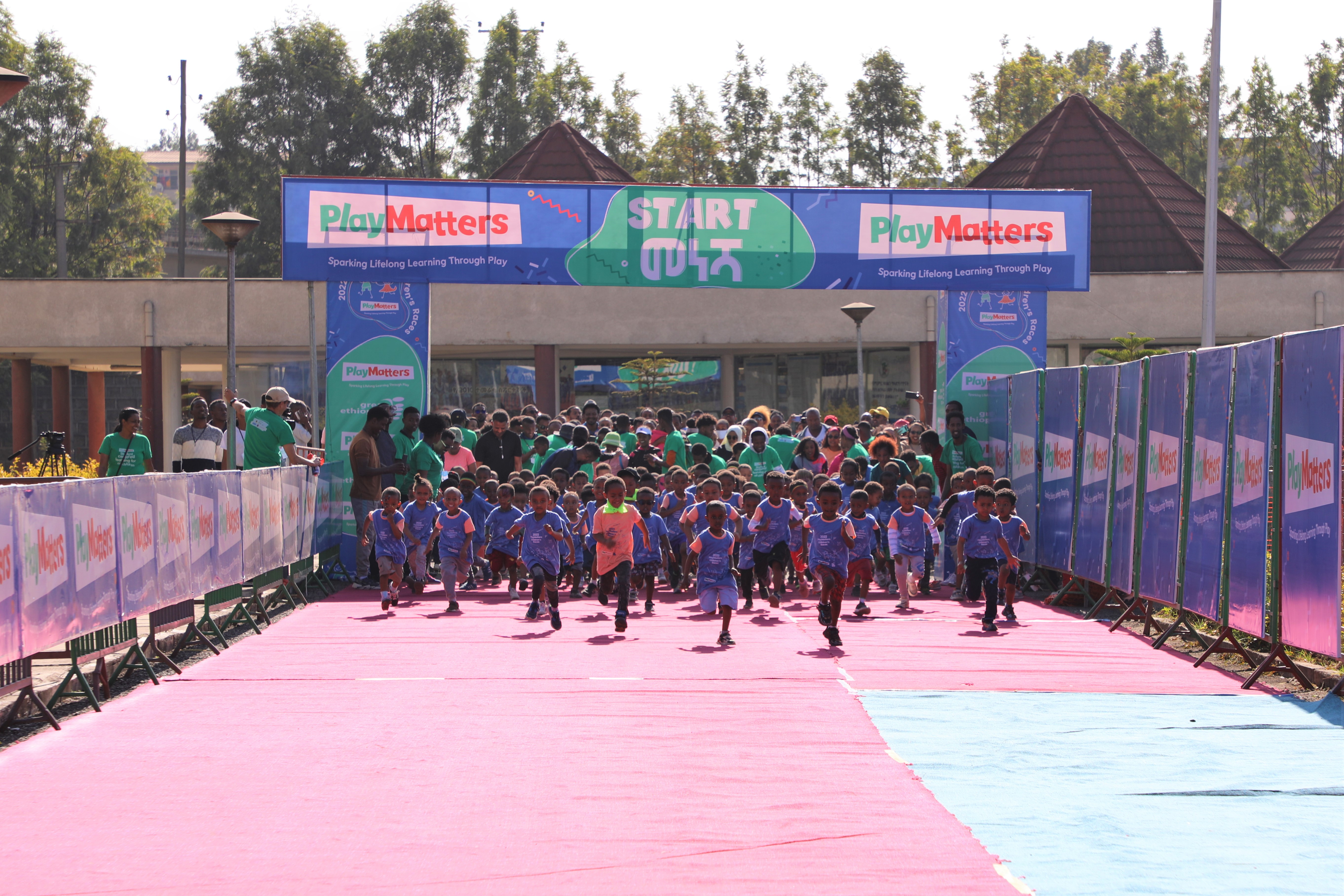 Early morning, Saturday November 19, 2022, the Ethiopian Youth Sport Academy was filled with children and their parents who were moving to the sound of the music coming from the stage, while eagerly waiting for the race to begin. 3,000 children from the age of 4 to 11 participated in event, accompanied by 2,500 parents and around 1,000 community members from all walks of life who were cheering the children and providing moral support.

The entire venue was lit up by the cheer and the smiling faces of children wearing the PlayMatters’ branded T-shirts. They jumped up and down with excitement and anticipation, while the blue, orange, and green brand colors holding different messages of play-based learning.  Play based learning, active learning, hands-on minds- on learning, student centered learning and play-based learning the skills for tomorrow, were some of the messages echoing from the podium, in both Amharic and English languages.

Traditional sayings and proverbs about the benefits of play-based learning were also being aired. A Children’s favorite TV character and muppet, Ethiopis, / ኢትዮጲስ, graced the stage edutaining the children and adults, sharing messages of the power of play in children's learning, environment protection and inclusion, among others throughout event that lasted for nearly five hours.

“The joy in the children’s faces is priceless” said Meron Tsegaye, a parent and an attendee who run with her child on the 1.5 kilometers track.

Mosses Tanui, a former veteran Kenyan athlete who won the 10,000 meters Tokyo World Championships in 1991 and Peres Jepchirchir, another Kenyan long-distance runner who won the 2020 Women’s marathon at the 2020 Tokyo Olympics were the guests of honors of the event.

Haile Gebreselassie, who won 27 world records as a veteran athlete, and is also the managing director of the Great Ethiopian Run, said in his statement that the Children’s race is one of his favorite races because children are the future of the nation. “The event also provides an opportunity to find parents and the community in one space to deliver messages and create awareness on issues affecting our society,” he added, “this year, we are promoting play-based learning with the PlayMatters project.’’

All children who participated in the race received a medal of completion. The winner, 1st runner up and 2nd runner up received trophies, prize medals, and PlayMatters back-packs filled with scholastic materials, PlayMatters at home learning packets, and LEGO Six Bricks play kits, with their guiding manuals.

The event was covered by major Ethiopian media houses, including newly launched children’s TV station “Ye Lejoch Alem” (Children’s world in English), who gave full coverage. ICARUS Sports broadcasting service, which distributes content in 180 countries, also covered the event, creating further awareness of the PlayMatters project and its play-based learning approach to a national and international audience. Colleagues from the PlayMatters consortium from the International Rescue Committee and Plan International participated in the event. Learn more about PlayMatters sponsorship of the Great Ethiopian Run Children’s race.